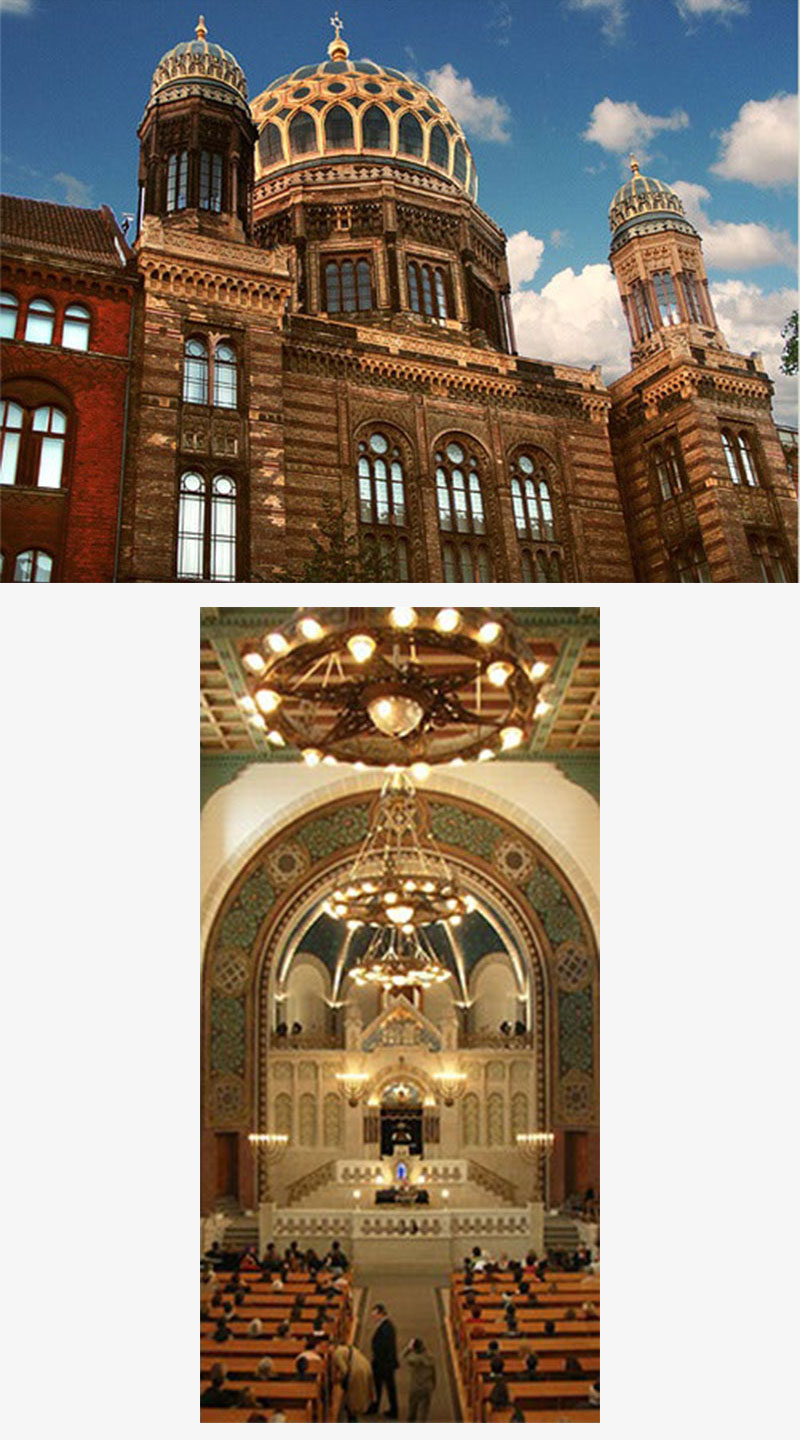 We are a part of Beth Israel Sinai Synagogue in Racine, Wisconsin, dedicated to the history of Southern Wisconsin, with special emphasis on the rich Jewish history of Racine County.

Our first video is NOW SHOWING on Youtube- entitled “THERE ONCE WAS A WORLD- SOUTHERN WISCONSIN HISTORY MUSEUM.” The video begins with the beautiful dome of the Oranienburgerstrasse Synagogue in Berlin, then shows the destruction of the synagogue on Kristallnacht, November 9, 1938.

We hope you enjoy the video and look forward to feedback from everybody at Shul. If you prefer, you can email your feedback

Special thanks to Jay Hyland and the staff at the Jewish Museum of Milwaukee for their assistance in researching the “FOUR JEWISH BOYS” article. Jay Hyland is a MENCH among MEN.

Special thanks to Dena Abramowitz, who is the WEBSITE GENIUS who took our idea of starting an ONLINE MUSEUM and made it happen despite the fact that she is “OFFICIALLY GONE FOR THE SUMMER.” Thank you Dena!!

FAMILY RESEARCH ASSISTANCE- If you need help with research into your genealogy or other historical research, contact the “SHUL” (Synagogue) and we will be happy to assist you.

If you are researching your family genealogy, we suggest starting with this link to over 300 Jewish gravesites, which can be searched easily by family name, giving dates of birth and death, parents, spouses, siblings, and pictures of most of the gravesites.

Many of the gravesites are “Family Plots,” which makes it easier to locate your relatives’ monuments for the entire family. The cemetery is very well maintained, meticulously manicured, and a beautiful, quiet place to visit relatives from the past and keep their memories alive. Bring a few stones to leave
on your family members’ monuments.

After the Japanese attack on Pearl Harbor, many young men all over the country volunteered for military service to fight against the Nazis and the Japanese.

Pfc. Harvey R. Shovers was born on April 28, 1923 in Racine, Wisconsin. De died at age 22, and was buried in Racine Jewish Cemetery. He was killed in the Pacific theater. In 1956 his mother, Mrs. Oscar Shovers, went to put flowers on his grave on his birthday, and found his grave vandalized. Asmall American Flag that was left by his gravesite had been broken and torn. His monument wasbroken in several places. Mrs. Shovers offered a reward to find the vandals, not to have thempunished, but so “She could talk to them and tell them about Harvey.

”Sgt. Leonard D. Hulbert, born 8/1/25 died 1/28/45, age 19, was a tail gunner aboard a B-24 bomberflying his 26thmission over Germany, 4 missions short of going home. His plane, “Lady Eve” droppedits bombs on Gelsenkirchen, Germany, and a moment later, was struck by German anti aircraft fire(FLAK).

Lady Eve rolled over and sliced off the wing of the B-24 flying next to her in close formation.Both aircraft went down, with 20 men aboard, 18 were killed and only two survived. Lady Eve was Serial Number 42-95164. She was a B-24 H. Sgt. Hulbert is buried in Garbeck, Germany. There is amarker in the Racine Jewish Cemetery. Other details I found: Sgt. Leonard Hulbert was a member ofthe 577th Bombing Squadron, 392nd Bomb Group, Dog Tag Serial number 16116074. Lady Eve waspiloted by James Dodd, who was killed in the crash on January 28, 1945.

Also killed was MorrisEpstein, Radio Operator. Surviving crew members- John Muka, right waist gunner, Maclovio Olivas,left waist gunner, both became POW in Germany. Leonard Hulbert was survived by his father, NathanHulbert.“Lady Eve” dropped its bombs on Gelsenkirchen, Germany and its “Buer Synthetic Oil Plant. I had never heard of Gelsenkirchen, so I did a little research.

KRISTALNACHT IN GELSENKIRCHEN- On November 8, 1938, the Nazis ordered that windows beshattered on Jewish shops, homes and synagogues. In Gelsenkirchen, the local Nazis burned downthe synagogue, murdered many Jews, and arrested others, forcing them to sign over properties andultimately killing many of the Jews of Gelsenkirchen in Dachau. Six years after Kristallnacht, the EighthAir Force arrived, bringing revenge in spades.

Pfc. David Lester Gordon, born 1922, died July 11, 1944, was wounded on the Island of Saipan in theMarianna’s Islands, was evacuated to Hawaii and died in Honolulu. He was a member of the105th Infantry Division, which was virtually wiped out by a massive “BANZAI” charge of 4,000Japanese soldiers committing mass suicide- the largest charge of its kind in WWII- nearly everymember of the 105th Infantry Regiment was either killed or wounded on July 7, 1944. David LesterGordon, Dog Tag Serial Number 36279693, is buried in Honolulu at the National Memorial Cemeteryof the Pacific, known as “The Punchbowl” David Lester Gordon is buried among 57,000 other heroes,including Ernie Pyle, famous correspondent killed on Okinawa, and many Congressional Medal ofHonor winners from WWII, Korea and Vietnam. He was survived by his mother and father, MorrisGordon and Sarah Gordon of Racine, Wisconsin.

Sgt. Norman Hirsch Gordon, born 1922 died August 26, 1944, age 19, he was a tail gunner aboard aB-17 called “Skylark” flying his 7th mission over Germany, when his plane was attacked by Germanfighter planes. Skylark’s number 4 engine was “KAPUT” and the plane was going down. The pilotordered “Abandon Ship” and all 10 crewmembers bailed out. They floated down over the “practicerange” of a German SS Tank and Artillery unit, and the Germans began shooting their cannons at theparachutes (a War Crime under the Geneva Convention). Only one of the 10 airmen was hit- Sgt.Norman Gordon, while floating down in their parachutes. The Germans had so much fun shooting atthe parachutes that they continued shooting at the parachutes on the ground, (also a War Crime underthe terms of the Geneva Convention) once again hitting Sgt. Gordon, killing him. Sgt. Gordon was theonly crew member killed. Eight others were taken prisoner, and one crewmember landed outside the“practice range” and made it back to allied territory without being caught. “Skylark” was serial number42-97204, model B-17-G built by Boeing Aircraft co. Sgt. Norman Gordon, Dog Tag Serial number36819163 is buried in Holland. There is a monument in Racine Jewish Cemetery to Sgt. NormanGordon and his brother Pfc. David Gordon. Shortly after the death of Sgt. Norman Gordon, his family was informed of his death. Within twomonths, the parents of David Gordon and Norman Gordon, Morris Gordon and Sarah Gordon, had lostboth of their children, a devastating tragedy. Morris and Sarah would live for many more years, butthings would never be the same.